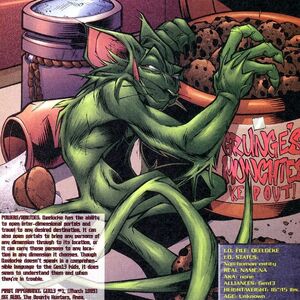 The Qeelocke is a unique animal that came to Earth from another dimension. He can open portals to travel planet wide, even up to the moon. He came to Earth to escape the Bounty Hunters. He ended in a club's toilet and hide in Gen 13 Freefall's jacket. When the hunt party came to claim its prize, they faced the whole Gen 13 team, coming at the rescue of Roxy after Lynch pinpointed the distortion created by the Bounty Hunters' teleportation. After that, the pet adopted Freefall, and they fell for the little furball. Only Lynch saw the potential threat of keeping a creature people were ready to cross dimensions to get.

When Gen 13 were put to certain death by Trance and his teammates, the Qeelocke saved the day by bringing the cavalry in the person of Anna, their android housemaid.

During the 'Fire From Heaven' episode, we finally discovers what the events at the club foreshadowed. The Qeelocke was the key to Damocles' plans. He wanted to use its powers to suck Earth's life energy to restore his own version of Earth, which he destroyed in a misguided attempt to save it.

Retrieved from "https://aliens.fandom.com/wiki/Qeelocke?oldid=138487"
Community content is available under CC-BY-SA unless otherwise noted.