Ben 10
The Pyronites are humanoid magma-based aliens from the planet-like star Pyros.

Pyronites are a humanoid plasma-based species composed of a bright inner plasma body[1] covered by a rock-like skin and flames flaring up on their heads like hair. As they age, a Pyronite's flames become lower, their shoulders resemble miniature volcanoes, and their hands change to a different color.

Female Pyronites are basically the same as males, except they have more curved figures, chests slightly jutting outward, and can sometimes have the flames on her head blowing to either side.

Although they traditionally have skin ranging from yellow to orange to red, Pyronites can come in other colors. For example, Pyronites either from Dimension 23 or infected with an Earth cold have blue skin, Gwen 10's Heatblast has pink skin,[2] and Hot Shot has olive green skin. It is even believed that there are white Pyronites.[2]

Pyronites are masters of fire, capable of generating flames from their bodies in many forms ranging from shooting fireballs from their hands to breathing fire out of their mouths like dragons. Their flames are powerful enough to harm Sonorosians, Xerge, Vaxasaurians, hybrid Prypiatosian-Bs, Vladats,[3] and even Celestialsapiens.[4]

Pyronites are not limited to simply creating fire. Because their bodies are naturally heat convective, they are able to absorb heat, effectively allowing them to put out fires.

Since they are literally made of fire, Pyronites are fireproof, heat-resistant, and invulnerable to magma. They are also cold-resistant and ice-proof thanks to the heat they produce.

Pyronites appear to have enhanced durability, being able to withstand being thrown across multiple buildings at high speeds with no visible damage. For Omni-Enhanced, Omni-Kix, and Omni-Naut Pyronites, their natural durability is increased thanks to their respective armors.

Pyronites are capable of limited terrakinesis by channeling fire through the ground,[5] allowing them to "surf" through the air on a board of rock.

Due to the solar-like radiation they generate, Pyronites are immune to being possessed by an Ectonurite.[2]

Pyronites can shoot streams of fire by pointing their arms downwards, providing them with a means of flight. As they age, their flight becomes more natural. For Omni-Enhanced and Omni-Naut Pyronites, they can instead use their jetpacks to fly.

Pyronites can create huge tornados made of their fire.

Despite being a fire-based species, Pyronites can breathe underwater. Correlating with this, Omni-Enhanced Pyronites possess a higher tolerance to water. However, Omni-Naut Pyronites can their fire powers while underwater without them being neutralized thanks to their Omni-Naut armor.[6]

Due to the alterations Kevin Levin has made to the Antitrix, Hot Shot is more powerful than ordinary Pyronites.

Omni-Enhanced Pyronites possess a level of electrokinesis, allowing them to electrify their fire attacks.

Omni-Kix and Omni-Naut Pyronites are equipped with flamethrower arms that can shoot fire as either projectiles or streams.

Because of their heat and fire-based nature, Pyronites do not react well to water, fire retardants, or a Crabdozer's saliva. Exposure to these substances can temporarily extinguish their flames, preventing them from using the full extent of their abilities.

A Pyronite's fire attacks are useless against certain species and materials, including Crabdozers, Aerophibians, Petrosapiens, Tentaclaws' Species, and anything else diamond-related. Even the most intense heatwaves they can generate are ineffective against a Chimera Sui Generis.

Pyronites can temporarily be controlled by a Vladat's Corrupturas until they can be burned off with a small flare.[2]

Pyronites can lose their fire out of exhaustion after continuously using their powers for a while.

Pyronites can be affected by magic, as there is a spell that can constrain them in glowing purple "chains".

Despite their cryokinetic powers, Pyronites affected by an Earth cold work completely "nonfunctional" to their naturally fiery nature. Similarly, said cold will prejudice their health.

Due to their homeworld being a planet-like star, Pyronites have had limited contact with other alien species. Because of this, they have spent their whole lives perfecting their pyrokinetic abilities by trying many different extreme sports, like windsurfing and Dune Buggy racing.

Pyronites cannot wear clothes, or at least have difficulty wearing them.[2]

A few coats of Pyronite wax can make anything completely fireproof.

A year after Ben Tennyson found the Omnitrix, a Pyronite Diplomat was captured by Servantis and the Rooters and became the donor of Alan Albright's alien DNA.

During one of their games, the Pyronites were visited by the Ekoplektoids, who came to Pyros unexpectedly to search for more space for their own kind.

Kineceleran representatives came to Pyros to discuss with the Pyronites about the diplomacy while the younger members of both races played a heated game of fire balls. 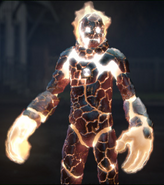 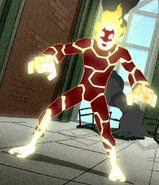 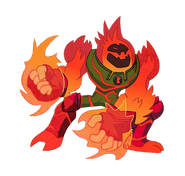 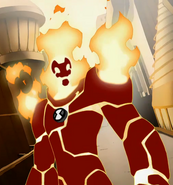 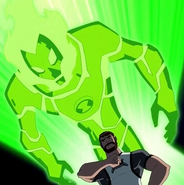 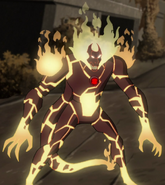 The Alpha Nanite as Heatblast 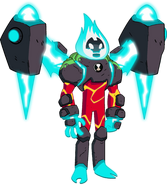 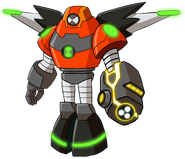 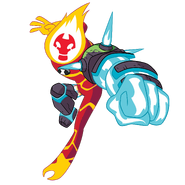 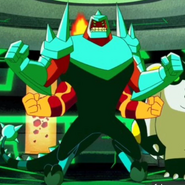