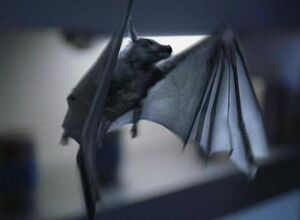 Same as an Earth bat (approximately)

The Pyrithian Bat is a non-sapient flying mammalianoid with an external appearance almost identical to that of an Earth bat. It has light grey fur and its preferred food source is Snow Beetles, possibly indicating an arctic natural environment. The bat will also feed on moth larvae, and Sluggo was once suggested as a potential food source as well. Apparently, the Pyrithian Bat will only consume live prey.

A Pyrithian Bat is one of the many live organisms kept by Doctor Phlox in his sickbay, presumably for medical purposes, although he has admitted that he sometimes talks to his bat, possibly considering it as a pet.

Retrieved from "https://aliens.fandom.com/wiki/Pyrithian_Bat?oldid=180748"
Community content is available under CC-BY-SA unless otherwise noted.