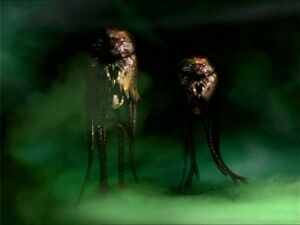 Andromeda
The Pyrians are a methane-breathing imperialist race who are an intergalactic power in the Local Group of galaxies.

Prior to the fall of the Systems Commonwealth in 9786 CY (4860 AD), their most powerful class of warship (Glorious Heritage-class Heavy Cruiser) was barely a match for a Pyrian Torchship. In battle the Pyrian warships use artificial gravity mass packs (missiles) which disable or slow down an enemy ship, plasma cannons to slice up the ships, and neutron ground attack missiles. To pyroform worlds to make them suitable for the Pyrians, they would drop atmosphere generators onto the planet's surface.

When the Systems Commonwealth fell in 9786 CY (4860 AD), the Pyrians, unlike the other spacefaring races, did not experience a dark age of war, slavery, genocide, poverty, famine, and disease. Since they now had no equal nor even a near-peer in the Local Group of galaxies, the Pyrians became the unchallenged superpower of the known galaxies. Therefore they began a period of expansion, with few post-Fall governments able to resist the Pyrians. Unlike other races and worlds, they did not experience technological stagnation, much less decline. Pyrian technology continued to advance during this period.

Retrieved from "https://aliens.fandom.com/wiki/Pyrian?oldid=188261"
Community content is available under CC-BY-SA unless otherwise noted.