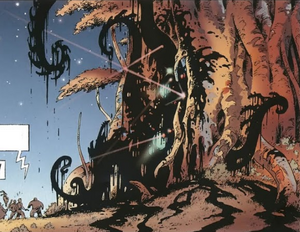 The Pumpkween was an aberrant plant created by the central computer of an abandoned Agricultural Station.

A carnivorous plant whose vines can ensnare live prey. Its victims' blood nourishes its many limbs, however it usually takes it victims to its digestive tract so it can dissolve it. Originally was created as a new strain of vegetable with greater performance. The name stems from an old human legend of the Halloween Pumpkin. After it mutated, the Gondey and Wild Men who lived in its prescene became infected with spores in their lungs. Perhaps due to this they were influenced by the plant to bring offerings. When exposed to light it thralls are highly affected by the intensity, sprouting vines from their bodies becoming zombies.

Retrieved from "https://aliens.fandom.com/wiki/Pumpkween?oldid=141748"
Community content is available under CC-BY-SA unless otherwise noted.