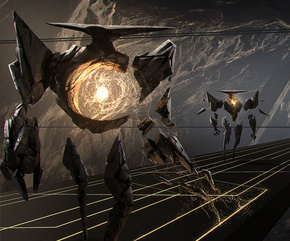 Endless Universe
The Pulsos are a subspecies of Harmony from Endless Space.

The Pulsos are levitating pieces of sentient rock, however unlike their Harmony cousins, the stone that compose the Pulsos are more jagged, flat and darker.

The Pulsos trace its origins when the Harmony traveled through the Endless Galaxy in their holy quest to find the Core. Many of its members were exposed to Dust, freeing them from the collective consciousness. The uninfected Harmony saw these deviants and Dust to be aberrations and turned to a war of extermination to wipe all traces of Dust from the face of the universe. The era of Disharmony began forcing the once peaceful race to wage a war of purification on the many civilizations of the galaxy.

The Pulsos share their origins with the Harmony, a species of sentient crystal, that traverse the universe seeking its mystical Core.

After several members of the species became infected with Dust it severed them from the collective, allowing them to possess independent thought. Though many wished to leave the Endless Galaxy, some of these converted Harmony decided to stay to study Dust.

Retrieved from "https://aliens.fandom.com/wiki/Pulsos?oldid=182334"
Community content is available under CC-BY-SA unless otherwise noted.