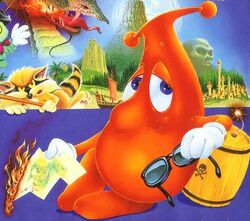 Puggsy
Puggsy is an alien of an unknown race (believed by some to be known as the Pugg) who accidentally crashlanded his spaceship on an equally-unknown planet, simply known by Puggsy as "The Planet". Despite his small size he was well known for his endurance and apparent strength. He, and potentially his entire species, apparently had the ability to either breathe underwater or hold their breath for extended periods of time, not unlike a whale or a penguin of Earth.