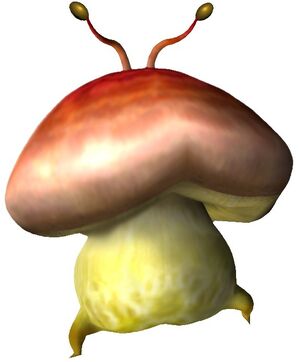 The Puffstool, also known as the Red Sporovid is a species of walking fungus discovered on the planet PNF-404 in the underground areas of forests.

The Puffstool, to sum up, is a walking mushroom: two very small legs on the bottom half of the body keeping it standing, and a set of antenna on top of its mushroom-like cap. Its skin is very elastic on the top, but the bottom is vulnerable to attackers.

Puffstools hold a very specialized, poisonous spore that can be released in defense in the form of a spore cloud. These spores causes deep irritation to large predators and can suffocate smaller ones if overly-exposed to it. In Pikmin however, the Puffstool's spores turn them into Puffmin, which it can also use as a means to protect itself against attackers.

With neither of these, it is helpless and very vulnerable. It will often try to run away from an attack first before deploying any fight.

Retrieved from "https://aliens.fandom.com/wiki/Puffstool?oldid=169602"
Community content is available under CC-BY-SA unless otherwise noted.