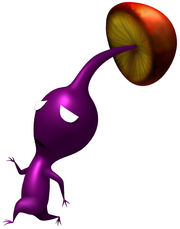 The Puffmin, also known as Toadmin, or by their full description Mushroom Pikmin, is the end resulting subspecies of a Pikmin becoming infected by the spores of the Puffstool. They are much rarer than other Pikmin, and only observed during Captain Olimar's first visit, alongside the Puffstool.

Puffmin have the same type of body as they had before becoming infected, though their skin turns a dark violet (not the same as a Purple Pikmin). Their eyes lose their pupils, and their faces develop a slit for them to breathe, as their leaf/bud/flower becomes consumed by a mushroom-like fungus instead.

Their behavior is drastically altered under the spore influence. These types don't aid other non-infected species of Pikmin, and constantly follow the Puffstool around, praising it and protecting it from attackers. They will mercilessly attack other Pikmin in this state. There had been cases however of Pikmin becoming "carriers" of the spores, and behave the same as any other Pikmin though these types are exceptionally rare.

Retrieved from "https://aliens.fandom.com/wiki/Puffmin?oldid=166398"
Community content is available under CC-BY-SA unless otherwise noted.