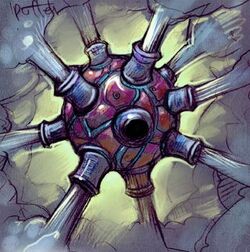 Puffers are gasbag-like organisms native to the Magmoor Caverns on Tallon IV. Puffers are dangerous creatures, their fragile bodies filled with lethal Meta-Viprium Gas, and they explode at the slightest touch. The gas they leave behind is just as lethal as the explosion itself.

Puffers are often employed as watchdogs by the Space Pirates on Tallon. A cybernetically-enhanced variant, the Preed, was also used on Aether. In reality, no animal like the puffer could ever exist, for a solitary creature fends for itself, and itself only, thus, exploding would make no sense, because it would kill them, the puffer would have to be a eusocial creature with a queen for its lifestyle to make sense, and so far, no evidence of this has surfaced.

Retrieved from "https://aliens.fandom.com/wiki/Puffer_(Metroid)?oldid=180555"
Community content is available under CC-BY-SA unless otherwise noted.