Alien Species
Register
Don't have an account?
Sign In
Advertisement
in: Anatomy of an Alien Universe, Non-Sapient Species, Greenworld Wildlife,
and 4 more 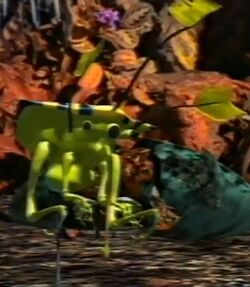 Dougal Dixon
The many different kinds of Puds are alien life forms native to the Earth-like planet Greenworld. They're a highly diverse group which includes thousands of species encompassing different shapes and ecological niches, somewhat analogous to Earth's beetles in that aspect.

Like all major faunal organisms on Greenworld, they evolved from a six-limbed starfish-like ancestor with radial symmetry, which later developed bilateral symmetry secondarily. In the Puds' case, they still have six limbs, but now arranged differently, with two limbs on each side plus one on the front and one on the back, which is the largest, most well-developed limb and used for hopping.

Some Puds live on the undergrowth of the planet's tropical jungles where they scavenge fallen fruits and are preyed by the armored Kwank. 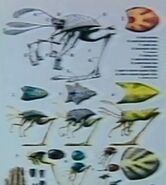