"The universe stretches into infinity! What life can survive its expanse? Dare you face the envoy of the stars?"
―Arbiter of Time introducing the PuPu in FFXIII-2. 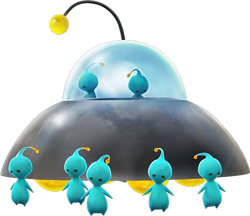 About a meter (with antenna)

Final Fantasy
The PuPu are a recurring race of small aliens appearing in the Final Fantasy series, known for abducting objects.

The PuPu are turquoise-colored sapient bipedals with about 1 meter of height. Their arms are simple fingerless formations, resembling wings, while their feet are small protuberances used for locomotion. The most interesting trace of the species is its yellow-tipped antenna, which uses are unknown (possibly communication).

The PuPu are a very technologically advanced race, possessing the technology needed for interstellar travelling, which they perform through their UFOs. In Final Fantasy X-2, the enemy Iron Giant appears to be made by the PuPu, as a member of the race is seen exiting it after its defeat, this scene also demonstrates the teleportation technology of PuPu ships, as the alien is almost instantly transported from the surface.

Although mostly known by the individual seen and fought in Final Fantasy VIII, the race also makes several appearances in later games. PuPu is a summon in the Dissidia Final Fantasy series, where it is referred not as a single creature, but an entire race, which may have earned their name from the sound made when they walk. FFX and FFX-2 feature PuPu dolls and, in FFXIII (in Palumpolum and Eden) and FFXIII-2 (in Academia), black silhouettes of the alien can be seen. In the anime series Final Fantasy: Unlimited, a PuPu and its UFO can be seen on the bridge of the submarine Jane as part of the its control hub at the center of the room.

Retrieved from "https://aliens.fandom.com/wiki/PuPu_(race)?oldid=180240"
Community content is available under CC-BY-SA unless otherwise noted.