Alien Species
Register
Don't have an account?
Sign In
Advertisement
in: Creatures with Unknown Diets, Anatomy of an Alien Universe, Non-Sapient Species,
and 6 more 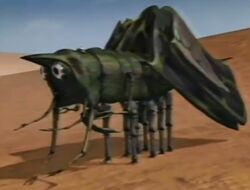 A Pterapede with its wings folded.

Natural History of an Alien
The Pterapede is a large, non-sapient arthropoid native to an unnamed high-gravity planet. Its homeworld has sandy, vegetation-less ground, characteristic of desert worlds. Nevertheless, there are large bodies of water where the Pterapede goes to drink and to shed its exoskeleton. Moulting underwater is much easier for this large insectoid, because it reduces the effects of gravity.

The Pterapede has several biological traits that make it well-adapted to survive in a high-gravity environment. It has lungs located on the tip of its tail, which, being a much more effective breathing system than the one used by Earth's bugs, allowed the Pterapede's ancestors to grow to a much larger size. It also has multiple legs that are positioned directly under its body, in order to better support its weight. Its wings, however, are not as large as one would expect, because since the gravity is higher, the atmosphere is denser and flight becomes easier.