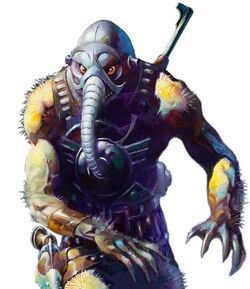 The face of a Psychlo is composed of amber-colored eyes, fanged teeth and a series of shifting bony plates with a limited range of expression. The entire body is hairy and they have paws with sharp talons instead of fingers, with a sixth talon in their right paw. Their home planet, Psychlo has an atmosphere very different from that of the Earth, and their "breathe-gas" actually explodes upon contact with even a trace amount of radioactive metals, including uranium.

Their technology notably includes the Psychlo Blaster, which is basically a two-in-one weapon, with two barrels - one barrel fires a destructive shot and the other emits a green pulse that stuns and knocks targets back.

The Psychlos discovered evidence of mankind's existence upon accidentally coming across the Pioneer 10. A plaque on the satellite was made of gold-anodized aluminum, a very valuable substance on the universal commodity market. The Psychlos used it to guide them to Earth, where they gassed and killed most of the Human population, then invaded to set up a planetwide mining operation, one of thousands of such in their empire. Tiny enclaves of Humans linger in wilderness areas, noticed by Psychlos only to "keep them out of the way" of the Psychlo plan of operation. Psychlos are sadistic hunters by nature, and sometimes enjoy a safari after Humans. The Humans have devolved to pre-technological primitives, and have survived only by living in radiated areas which are slowly driving man to extinction; areas the Psychlos cannot enter safely since their breathe-gas explodes there.

The Psychlo occupation of Earth lasted for a millennium, during which time Earth became a backwater world even for the Psychlos, and assignment to it was considered similar to an assignment to Hell. Around this time, a ruthless (even for Psychlos) and equally greedy Psychlo named Terl was assigned to Earth as security chief, and has his term extended indefinitely for angering the wrong official. Fearful of spending the rest of his years on Earth, he decides to buy his way off the planet while at the same time become ridiculously wealthy. He discovers a large vein of gold in the Rocky Mountains, but cannot go near it himself as it is surrounded by uranium deposits that would make mining by Psychlos impossible. For this task, he captures a Human and trains him to do the dirty work for him with a computerized teaching machine. Terl is arrogant enough to call the Human "rat brain" and does not notice the Human using the machine to learn far more than Terl suspects.

The Human uses the machine to train other Human miners for Terl, but really trains them for rebellion. This group discovers a way to destroy both the Psychlo on Earth as well as nullify any later threats of retaliation from the planet Psychlo. Semi-annually, the Earth colony teleports personnel, goods, and coffins; in terms of the latter, all dead Psychlos are shipped home for burial upon their homeworld. It is during this routine operation that the Human rebellion strikes. They succeed in packing several huge coffins with nuclear dirty bombs and "planet busters" with the hope of destroying the Psychlo homeworld. Upon the teleportation's firing, the Humans then take over the Psychlo war planes, tanks, and weaponry to regain control of the Earth.

The dirty nukes and planet busters successfully detonate, but are kept at bay through the impressive shield technology that were setup as a final defensive measure, However, the concussion force of the blasts caved in the mostly hollowed out planet (due to millennium of over-mining) caused a collapse that eventually destroyed the entire planet, killing all of its inhabitants. In addition, it it later learned that all off-planet Psyclos were sterilized as a revolution prevention measure, so the race has become doomed to extinction, breaking their hold on the universes for all time.