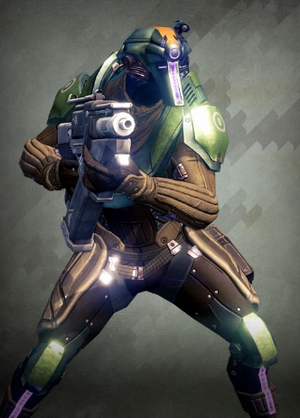 Destiny Universe
The Psions are a race of clairvoyant aliens from Destiny.

The Psions are humanoid and are divided into two sexes. They are formiable foes, possessing psionic abilities that allow them to fire psionic energy and see the future.

In the ages past, the Psions were enslaved by the Cabal wishing to weaponize their abilities for their empire. Their greatest achievement was the OXA Machine, a machine that could perceive the future, but the Cabal destroyed it after conquering the Psions.

Centuries after the Psions enslavement, a Psion named Freeborn Otzot later succeeded in rebuilding the OXA Machine. The Cabal originally wanted to destroy it but the Cabal leader, Emperor Calus instead rewarded the Psion, freeing her and making her a member of his court.

When Calus was about to make the decision of freeing Otzot's people, the Psion scientist schemed against this as it would dilute her standing in Cabal society. She conspired with the Consul and Ghaul allowing their coup to be successful to maintain her prestige and power.

Retrieved from "https://aliens.fandom.com/wiki/Psion_(Destiny)?oldid=182715"
Community content is available under CC-BY-SA unless otherwise noted.