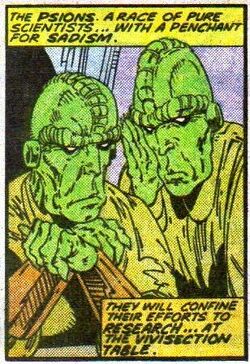 The Psions are a sapient species of humanoid reptile-like creatures, originally native to the planet Maltus. They evolved from a species genetically augmented by the ancient Oans, who left the planet afterwards, leading the Psions to develop much of their scientific culture from the Oans' abandoned technology. Unlike the Oans, though, the Psions became a cruel, hostile species. They later relocated most of their civilization to the Vega system and have also conducted experiments on local races, such as the Tamaraneans.

Retrieved from "https://aliens.fandom.com/wiki/Psion?oldid=163183"
Community content is available under CC-BY-SA unless otherwise noted.