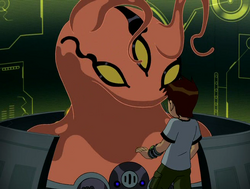 Ben 10
Protosts are a gelatinous alien species from the humid moon Myceto.

Protosts are orange blob-like aliens with two long antennae and three yellow eyes with no pupils.

Protosts have an almost liquid consistency, allowing them to stretch and morph their bodies at will to the point where they can extend the size of their bodies.

Protosts are fairly agile and can be dangerous combatants, especially because they are virtually impossible to strike or grab.

A Protost's morphing abilities give them the strength to overpower and destroy robots effortlessly.

By forming a ball around energy weapons, Protosts can protect others from their effects, though they can be invulnerable while doing so.

Protosts have exceptional healing capabilities, from being able to regenerate from just a few cells to 1 single cell.[1]

Protosts can assume shapes with numerous limbs and tentacles.

Protosts have eyesight superior to that of a Human's.

Despite their invulnerability, Protosts are weak to energy attacks.[1]

Protosts are considered to be one of the best engineer races.