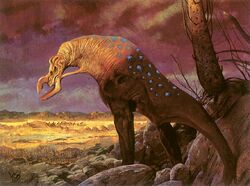 Prongheads are a Darwinian species of agile, well-muscled pack hunters filling a similar niche as the Wolf from Earth. They are named for the three hollow prongs which protrude from their face, acting as tubes to siphon liquids from their prey. Digestive fluids are pumped into their victims through a pair of tubes on the sides of their foot spurs. A larger central tube is used to ingest this, now liqueous, food. They exhibit highly developed social behavior, working as a team, stalking their prey from all directions in an attempt to surround it.