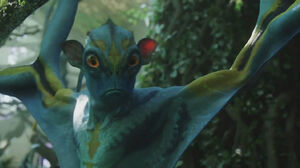 The Prolemuris, Syaksyuk for the Na'vi, are chattering, non-aggressive tree dwellers inhabiting the rainforests of Pandora.

The Prolemuris has lateral membranes that grow out of its sides and between its lower arm and thigh. When it leaps from tree to tree, the wind catches in the flaps and slows the animal's rate of fall. This allows the animal to fall for more than twelve meters without risk or injury. They have hollow bones, and the density of their musculature and flesh is also porous, which makes them much lighter than they appear (even the largest weigh less than six kilograms). Its ears are erect flaps that can move independently of one another in order to track sounds precisely. Its toes are webbed and have a vestigial thumb that helps the animal cling to branches. Its arms bifurcate below the humerus (elbow). It can reach up to 1 meter in height. It has large eyes giving it binocular vision, an apelike skull with a short snout, small nostrils and jaw, needle sharp teeth adapted to cut through tough Pandoran flora.

The prolemuris can use its four arms to move through the trees faster than an average man can run. It has near-perfect balance and its superb depth perception allows it to leap from branch to branch while selecting just the right handhold out of the forest mosaic (in this it resembles the Na'vi, who can also move through the rain forest canopy with tremendous agility).

Retrieved from "https://aliens.fandom.com/wiki/Prolemuris?oldid=180315"
Community content is available under CC-BY-SA unless otherwise noted.