Probity's species is an unnamed color-based species from an unnamed planet that was once engaged in a civil war.

The two different ethnicities of this species are at war with each other. They had a statue of their leader, who is deceased and the color has long worn of, making them unsure whether he was red or blue.

This species shake hands differently with each other. While the reds shake with their right hands, the blues shake with their left hands. Ben Tennyson found this out when he was trying to shake his right hand with the blue leader (who thought that Ben was siding with the reds as a result), degenerating negotiations between the two factions.

The species' currency is different between the armies. The blues use either hand-cut or polished jewels while the reds use gold and other refined precious metals.

For the most part, the war, from an outsider's perspective, always seems to change the deeper one seems to delve into it.

At first glance, one may be inclined to think that it is a civil war, only to learn that the combatants are really trying to defend their territories from encroachment by the opposition (closely affiliated with a Cold War in nature).

In time, the reason for the war is revealed to be a crusade, as both armies have been aggressively debating over the color of their leader, whose only statue had its paint chipped of over the course of millennia before Ben's arrival to the planet.

Afterward, it is discovered that both of the military leaders are fighting to distract the population from their races' bad economical situation. As a result, both the red and blue leaders are refusing to even consider signing a peace treaty in order to end it all.

Ben made things even more complicated when he accidentally knocked over the statue of Zabin as Way Big. The two armies joined forces as a single purple army and declared war against Ben, forcing Ben and his team to leave their planet. 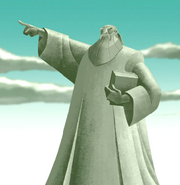 Zabin
Add a photo to this gallery

Retrieved from "https://aliens.fandom.com/wiki/Probity%27s_Species?oldid=168234"
Community content is available under CC-BY-SA unless otherwise noted.