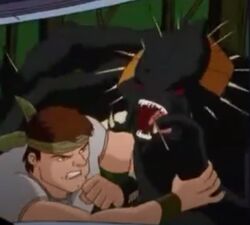 Predeterminator is one of the several extraterrestrial actors living incognito on Earth and affiliated with the Hollywood branch of M.I.B., better known as "the Agency", which allows him to appear in films in his actual alien form, instead of wearing a disguise.

Predeterminator is a tall muscular four-armed humanoid with black skin and red eyes.

Retrieved from "https://aliens.fandom.com/wiki/Predeterminator?oldid=180418"
Community content is available under CC-BY-SA unless otherwise noted.