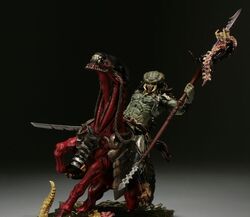 The "Predator Horse" is a riding beast utilized by the Yautja.

The Predator Horse is a large battle-mount (considerably large considering the Yautja and Human size difference), it has a glossy smooth head with no discernible eyes, ears, or nose, somewhat similar to a Xenomorph. It has a red body, a tail similar to that of a horse, and hooved feet.

Add a photo to this gallery
﻿

Retrieved from "https://aliens.fandom.com/wiki/Predator_Horse?oldid=163411"
Community content is available under CC-BY-SA unless otherwise noted.