Alien Species
Register
Don't have an account?
Sign In
Advertisement
in: Carnivores, Bipedal Species, All Tomorrows Universe,
and 14 more 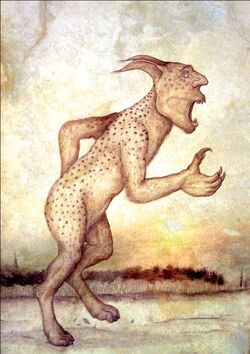 Evolved into the Killer Folk

Nemo Ramjet
The Predators and their prey were some of the posthuman species created by the Qu from a colony of the Star People.

They were the inhabitants of one of the first worlds colonized by the Star People. The Predators evolved paw-like hands with switchblade thumbs, strong jaws full of teeth and large, sensitive ears. These features had made them among the most effective of the many carnivorous posthumans in the Qu-conquered worlds.

Their prey were a herbivorous human species with bird-like legs, far less intelligent than their predators, the latter of whom eventually evolved into the Killer Folk.