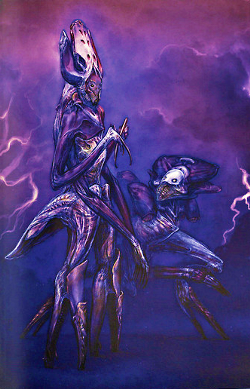 The Precursors are an ancient race from another universe which are best known as the creators and masters of the Kaiju. They are a spindly insectoid species, standing about 12 feet in height, and their society is divided in three castes: Bishops, Cardinals and Ambassadors.

In the Triassic era the Precursors created a portal to our universe called the Breach (in the Pacific ocean) in a plan to colonise planet Earth and possibly our universe. However the CO2 levels were too low for it to work. In 2013, they reopened the breach because Humans had been pumping CO2 into the atmosphere making the conditions right for them. The precursors then created the Kaiju in an attempt to colonise our planet and began sending them through the breach in 2013 starting the Human - Kaiju war.

Over the period of 2013 to 2025 the Precursors sent 46 Kaiju through to attack Earth. The first Kaiju (Trespasser) managed to destroy 3 cities (San Francisco, Sacramento and Oakland) before being killed by three nukes. However six months later the Precursors sent another Kaiju named Hundun to attack Manilla and with each Kaiju killed The Precursors kept sending more and more, until the Humans decided to create the Jaeger program in order to combat these monsters. The Jaeger's were giant robots controlled by the two pilots minds. At first this was working, the Jaegers were killing the Kaiju but in 2020 The Precursors began designing Kaiju to fight Jaegers. For example Knifehead had a giant knife shaped head in order to stab into the Jaegers, Leatherback had an EMP pulse on it's back, giving it the ability to disable any electronic Jaegers and Otachi had the ability to shoot corroding acid and even fly.

In the end there were only two Jaegers left out of 30 however the Humans came up with a plan to shut down the breach using the DNA of a Kaiju to open it and drop a nuke into the Anteverse. Although the Precursors sent three Kaiju to defend the breach, the plan was a success and the breach was closed. 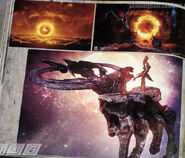 Precursors and the Breach concept art. 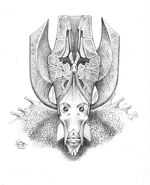 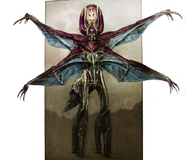 Precursors look on as Gipsy Danger descends into their universe.

Retrieved from "https://aliens.fandom.com/wiki/Precursor_(Pacific_Rim)?oldid=185809"
Community content is available under CC-BY-SA unless otherwise noted.