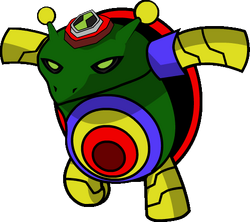 Portaler's Species is an unnamed race of humanoid beetle-like aliens.

This species resembles anthropomorphic turtle/beetle amalgamations with turtle-like heads and two beetle-like antennae ending in bulbs. Their skin is colored in a mixture of green, yellow, blue, and red. They have segmented yellow limbs ending in stumps, blue shoulder plating resembling sleeves, sunken eyes, visible nostrils, a multicolored circular pattern on their stomachs, and a blue turtle-like shell with a red rim and rock-like spikes on them.

Much like Arburian Pelarotas, this species can roll into a ball.

This species possesses enhanced strength for their size.

This species can teleport by generating portals using their antennae.

Retrieved from "https://aliens.fandom.com/wiki/Portaler%27s_Species?oldid=184819"
Community content is available under CC-BY-SA unless otherwise noted.