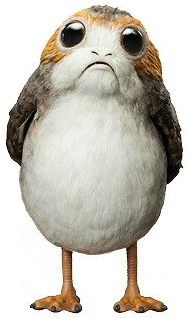 Porgs are small avian species native to the planet Ahch-To, where Jedi Master Luke Skywalker made his exile in the years following the battle of Endor. The creatures, who dwell on the cliffs of the island where Skywalker lives, can build nests and fly. Baby porgs are known as porglets. Ahch-To is not only home to them, but their cousins, the caretakers.

Retrieved from "https://aliens.fandom.com/wiki/Porg?oldid=180973"
Community content is available under CC-BY-SA unless otherwise noted.