Polymorph is a species of single-celled organisms that is neither liquid nor solid but a colloidal suspension[1] from the molten planet of Viscosia.

Polymorphs are 200-pound[2] (~ 90 kg) gelatinous extraterrestrial blobs of slime. The slime is normally in a humanoid shape with a pointed head, narrow eyes, and "spikes" on their shoulders. They can, however, turn into a shapeless mass such as a puddle or mimic the shape of something. Their brains are spread throughout their entire bodies.[1]

Polymorphs are scavengers that can dissolve and process any unclaimed organic matter they consume.[4]

Polymorphs can generate and shoot acidic or adhesive slime from their bodies as either streams similar to a water (when coming out of a hose), blob-like projectiles, or even spit despite not having visible mouths.

Polymorphs are almost invulnerable because even when their slime has been scattered all over the area, they can still recollect as long as their Anti-Gravity Projectors are still active.

Polymorphs can change their density depending on their desire.[1]

Polymorphs survive in intense heat, such as the one on their home planet.[2]

Polymorphs can mimic the shape of simple objects to fool an opponent.[5]

Using their Anti-Gravity Projectors, Polymorphs can fly. These projectors can also be used as a weapon since the edges are razor-sharp.

If Kevin were to use Ooze, he would be more powerful than ordinary Polymorphs due the alterations made to the Antitrix.

Outside of Viscosia's gravity, Polymorphs can only have their body function when they are united with their Anti-Gravity Projector. This means that if the two are separated, the slime will go inert until recollected.

Polymorphs are incredibly light, meaning that they can be easily sucked in by strong winds, such as that generated by Trombipulor's Species.

Polymorphs can be immobilized if repeatedly stepped on.

A Polymorph's voice is projected by their Anti-Gravity Projectors.

Whenever they are on a planet other than Viscosia, Polymorphs use Anti-Gravity Projectors to be mobile in a foreign planet's gravity. 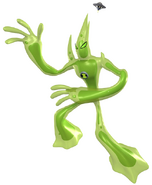 Humungoopsaur
Add a photo to this gallery

Retrieved from "https://aliens.fandom.com/wiki/Polymorph_(Ben_10)?oldid=177629"
Community content is available under CC-BY-SA unless otherwise noted.