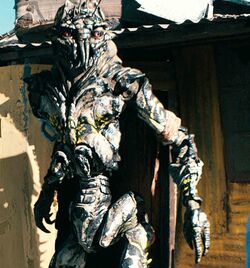 David Meng
"Prawns" is the derogatory term that Humans use for a sapient spacefaring species of bipedal insectoids whose ship landed on Earth in the late 20th century.

The term "Prawn" has led to a bit of confusion for some, as they are in fact not called this due to a resemblance to prawns. Instead, this name was given to them by the local people of Johannesburg, South Africa, due to their resemblance to a species of pest from that area, known as the parktown prawn, a species of king cricket as opposed to a crustacean. Their homeworld has seven moons. It is also possible that the species' true name is "Poleepkwa".

Physically speaking, they are toothless, and use a variety of feeding tendrils along the edge of their face to help quickly feed them. They are opportunistic carnivores and will eat just about anything they can come across, although for currently-unknown reasons wet cat food affects them in a manner similar to how catnip affects a cat. Unfortunately for them, this addiction has caused them to lose much in trades with the local Humans. This cat food addiction is used against them as a racist stereotype.

Their bodies are covered in a tough exoskeleton, and they are also notable for their three-fingered hands, large humanoid eyes, two pairs of antennae, and apparent inability to speak Human languages, although they can comprehend them. Prawn reproduce by laying eggs in batches, which are then fed from the blood of animal corpses. When young are born they appear to soon be capable of fully understanding their species' technology and also appear to undergo an incomplete metamorphosis, most likely shedding their exoskeletal carapace over time in order to grow in size.

The Prawns that landed on Earth are said to be the workers and or laborers, which means they are likely an eusocial species, like ants and bees, meaning there might be even bigger Prawns, like soldiers.

Prawn are apparently interested in a vicious faunal battle ring that functions in a manner similar to cockfights, which they produce using a species apparently indigenous to their homeworld.

Prawns technology is all bio-mechanical, and will only function with their DNA, although this includes combined DNA of themselves and any sapient organism hit with their fluid. They are best known for their battle-oriented power suits and weaponry such as their arc guns, although other technologies include starships, environmental bio-suits, other weaponry and presumably the fluid itself.