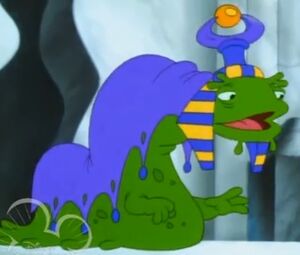 Timon & Pumbaa
The Plutonians are a race of large, gastropod-like creatures native to the dwarf planet Pluto.

As a society, they're ruled by a king, and are known for the practice of abducting representatives from other species and forcing them to compete for their planets in interstellar gladiatorial games, the winner of which is granted the right to marry the Plutonian Princess.

They also seem to have other species serving them as subjects, including the Plutonian Trumpeteers and Plutonian Guards. Their technology includes the traditional flying saucer.

Plutonian King and Princess
Add a photo to this gallery

Retrieved from "https://aliens.fandom.com/wiki/Plutonian_(Timon_and_Pumbaa)?oldid=181983"
Community content is available under CC-BY-SA unless otherwise noted.