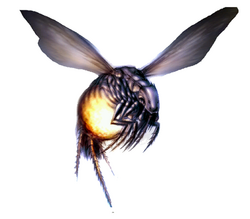 Dark rooms in the Chozo Ruins

Metroid
A Plazmite is a large insectoid species found on Tallon IV.

Plazmites give off a bioluminescent glow, providing helpful light in dark rooms (and presumably dark areas in general, although no known living witness can attest to this hypothesis). They thrive off of thermal energy and are attracted to it. They are normally just fly around peacefully, but attack if threatened by launching thermal bursts at foes.

Retrieved from "https://aliens.fandom.com/wiki/Plazmite?oldid=180552"
Community content is available under CC-BY-SA unless otherwise noted.