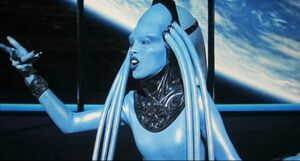 Maïwenn Le Besco
Diva Plavalaguna is a 23rd century alien singer who was entrusted by the Mondoshawans to guard the four elemental stones that would be needed to stop Evil when it woke up. She kept the stones inside her body and told Korben Dallas to retrieve them after she was fatally shot by invading Mangalores.

Plavalaguna is a blue-skinned humanoid of unknown species. She has numerous long tentacles protruding from her head and back. Her blood is dark greenish-blue in coloration. It appears that she's capable of singing combinations of notes that would be impossible for a Human performer.

Since the four stones are considerably large and she kept them inside her body without visible discomfort, it is likely that she has some sort of large hollow cavity inside her abdomen. Whether this is natural or artificial is not known. It's also hinted that she has telepathic abilities, which would explain how she knows about Korben's role in the plan and his connection with the Fifth Element.

Retrieved from "https://aliens.fandom.com/wiki/Plavalaguna?oldid=179602"
Community content is available under CC-BY-SA unless otherwise noted.