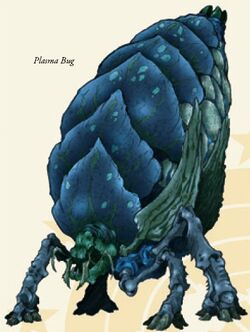 Starship Troopers
Plasma Bugs are massive Arachnids which have the ability to launch equally massive plasma bursts with such force that they can fly far beyond the orbit of the planets they are launched from, which can then deflect asteroids or slice a starship in two. They serve as not only the ground artillery and air defense roles, but also the planetary defense castes for the Bug colonies. Despite their inherently obscene level of firepower, their role for offensive actions is mainly limited to fire support and long-range bombardment due to their huge size and the immense danger to nearby Arachnids should a plasma explosion burst near them. If an enemy gets too close to them, however, they are capable of delivering a surprisingly powerful bite.They also can like the tanker spew super heated plasma from glands behind their head

They are most vulnerable when they create a plasma burst, and are in fact impervious to attacks at all under times except along their underbellies. They are also very slow, having an average speed of less than 2 kilometers an hour - less than a third the speed of an average human. To counter this vulnerability, they are always escorted by several packs of Warrior Bugs. They have a form of blindsight that extends to a range of 240 feet.