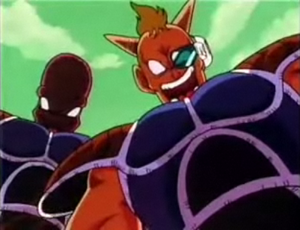 The Planet Trade Organization is the unofficial name for a galactic-scale empire known for taking over worlds to sell to the highest bidders. It was ruled by  Frieza's Species, more specifically Frieza himself, although whether it was ruled by a single family or by an entire species was unknown.

The PTO's earliest recorded (that are undeniably true) activities were the discovery and conquest of the Saiyan race in Age 730. Frieza employed/enslaved the Saiyan race as soldiers to decimate weak worlds for sale and to conquer strong ones. After seven years (Age 737), Frieza noticed that the Saiyans' average power level was growing to the point where they might be collectively able to threaten him and possibly to give rise to a Super Saiyan. Although the Saiyans learned of this and tried to stop him, they were simply too weak. Frieza destroyed Planet Vegeta and left only a few alive: Vegeta, Nappa, Raditz, Broly, Paragus, Turles, Tarble, and (unintentionally) Goku. Bardock also survived but was somehow sent back in time by Frieza's Supernova.

In December of Age 762, after Vegeta's failed invasion of Earth to acquire the Dragon Balls, Frieza, having eavesdropped on Vegeta's scouter, traveled to Namek in order to find that planet's set of Dragon Balls. Vegeta followed him there, where he encountered Gohan and Krillin. By that time Frieza had already acquired four Dragon Balls and killed most of Namek's population. Vegeta found all of the Dragon Balls after killing most of Frieza's minions, only for Gohan to steal one. When Frieza summoned the Ginyu Force, Gohan and Krillin were forced to ally with Vegeta. They were not nearly powerful enough to defeat them but were saved by Goku's timely arrival. Captain Ginyu had taken the Dragon Balls to Frieza, who then left to interrogate the remaining Namekians on the password to the Dragon Balls. After a long battle, Ginyu and the Ginyu Force's only other survivor, Jeice, were defeated, but Goku was forced to heal in a regeneration tank. Frieza returned, having failed to find the password, only to discover that the Earthlings had already discovered it and made two wishes. The Dragon Ball's creator died seconds before Frieza arrived, rendering the Dragon Balls inert. A newly resurrected Piccolo joined the fight against Frieza, but the protracted battle was in favor of the Changeling before Goku regenerated. After another long battle, Goku hit Frieza with a Spirit Bomb, only for his enemy to survive and murder Krillin. Goku's rage caused him to transform into a Super Saiyan, allowing him to defeat Frieza, but not before the tyrant was able to destroy Namek.

In August of Age 764, what little remained of Frieza was rebuilt as a cyborg by his father, King Cold. The two traveled to Earth to search for Goku, but were killed almost upon arrival by Future Trunks.

Later that year, Frieza's older brother Cooler invaded Earth for revenge, but was defeated by Super Saiyan Goku and launched into the sun. Though he did not die, he was unable to lead the PTO, leading to its collapse. However, their demise is underestimated and they continued to attack Earth at least thrice after the fall of the Cold family: once in Age 776, again in Age 820 and they, along with Miira and the Red Pants Army, finally conquered the Earth in Age 2000.

The PTO's government is an absolute monarchy, with Frieza and later Cooler as Emperor. The empire is governed from the ruling Changeling's ship, which visits conquered planets to restock on supplies. It could also be likened to a corporation, with King Cold as the owner and Frieza as the manager and de facto leader. Notably, most of the PTO's soldiers are unaware of King Cold's existence.

King Cold is possibly the true leader of the Planet Trade Organization, as in Budokai Tenkaichi 3 when Frieza fights Cold he says "Dad, Ill never be satisfied being number two". Though Frieza seems more likely to be the true leader for he is well known throughout the galaxy while King Cold spends all of his time on his ship and his existence is not known to anyone other than his elites, Frieza, and Cooler, King Cold himself also states that Frieza is the ruler of the universe just before attacking Future Trunks. King Cold's second son: Cooler, does not seem to have much leadership at all, being not so well known through the universe and also only possessing a small squadron of soldiers.

The best known piece of PTO technology is the scouter. This device, seen on the soldier to the right in the picture, allows the user to detect power levels. It was originally Tuffle technology before the PTO acquired it, mass-produced it, and eventually developed second-generation scouters. First-generation scouters can read power levels up to 22,000 before shorting out and harmlessly exploding, while second-generation scouters can read up to 530,000. The latter value is likely due to there being no need to manufacture a personal device capable of reading power levels higher than that of Frieza's first form. There is also a very large remote detection device capable of reading up to 120,000,000 (Frieza's 100% power; until his defeat this was believed to be the highest power level in the universe). These devices are built into planetary bases, despite reacting much the same way to an overload as scouters do. The explosion of such a device is far from harmless and will likely destroy the base completely.

The PTO has also developed sophisticated arms and armor. The standard issue weapon is the arm cannon, an eyedropper-shaped device mounted on the user's forearm that fires a beam of an unknown energy (possibly ki). The destructive power of the weapon appears to be similar to the primary gun of a large tank. Battle armor, seen on the soldiers in the picture, is made of a durable yet flexible substance. The exact durability of battle armor varies greatly depending on quality (Frieza's armor is far stronger than Raditz's, for example).

Somewhat surprisingly, PTO spacecraft are rather small. The primary ship, the Attack Ball, is a metal sphere about 1.5 meters in diameter. It is equipped with a door, a viewport, interior padding, life support, autopilot, an unknown form of FTL propulsion, and nothing else. Attack Balls are not used for battle but instead to transport individual soldiers to the surface of whatever planet is being invaded. Frieza and his family inhabit large, saucer-shaped motherships about 100 meters wide. These ships contain living space for the resident members of Frieza's race and for hundreds of troops. It also carries a complement of Attack Balls. The ships seen don't display any weapons, the PTO appearently relying mostly the superhuman strength of its fighters to conquer planets.

Retrieved from "https://aliens.fandom.com/wiki/Planet_Trade_Organization?oldid=173278"
Community content is available under CC-BY-SA unless otherwise noted.