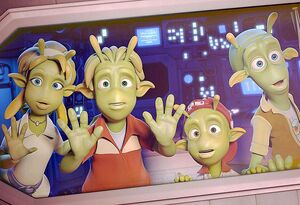 The unnamed green humanoids are the native sapient species of Planet 51.

They are humanoid creatures with green skin, antennae, four fingers and toes, no hair and no visible nostrils or genitals. A most peculiar feature is that they are able to survive after having their brains surgically removed, perhaps indicating that the neural system in this species is not fully centralized.

They also stand out as one of the only species which seems to have successfully domesticated Xenomorphs, creating a tame, playful and mostly harmless variety, which behaves exactly like an Earth dog.

Their society is strangely similar to Earth in the 1950's.

Retrieved from "https://aliens.fandom.com/wiki/Planet_51_native?oldid=182274"
Community content is available under CC-BY-SA unless otherwise noted.