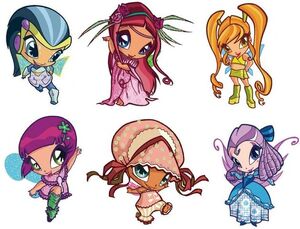 Created by the Magic Tree

Created by a magic tree

Iginio Straffi
The Pixies are a species of small sapient magical creatures that bond with fairies. Their magical abilities somewhat defy the laws of science, making them a bit mysterious, though they are undeniably adorable.

They are small humanoids with baby-like features, such as large heads in proportions to the rest of their bodies, short limbs and large eyes. Baby pixies are 5 cm (~ 1.96 inches) tall, young pixies are 8 cm (~ 3.14 inches) tall and adult pixies are 10 cm (~ 3.93 inches) tall. While not immediately noticeable, their ears are slightly pointed (well at least some of them). For a while only females of this species were seen, although one of them DID mention having a father.

They live in a village in an area known as "Gloomy Wood Forest", and wear clothing of various styles, some associated with different eras, like ancient Greek or Victorian times. They are said to have a leader/queen who is supposed also the mother of the younger pixies, however she isn't mentioned to have had any drones, and it's confirmed the pixies are created by a magic tree, so it's possible she's more of a mother figure. Their technology is powered by magic instead of electricity.

Chatta, the Pixie of Gossip

Digit, the Pixie of Technology 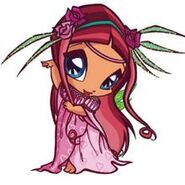 Amore, the Pixie of Love 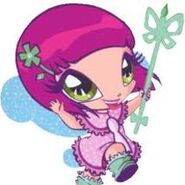 Lockette, the Pixie of Portals

Piff, a baby pixie and Pixie of Sweet Dreams

Tune, the Pixie of Good Manners

Ninfea, Guardian Pixie of Pixie Village's codex and the mother of all pixies. 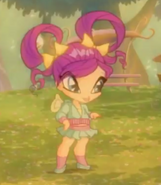 Cherie, the Pixie of Weather

Fixit, Pixie of Technomagic
Add a photo to this gallery

Retrieved from "https://aliens.fandom.com/wiki/Pixie_(Winx_Club)?oldid=189498"
Community content is available under CC-BY-SA unless otherwise noted.