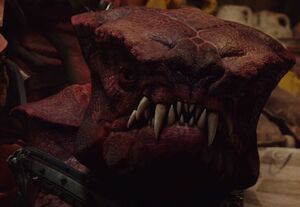 Pit-Ghors are a non-sapient species of reptilian quadrupeds with red skin and sharp teeth. They're native to the second dimension which can be visited virtually on planet Kirian. They appear to be smaller relatives of the Megaptor.

Retrieved from "https://aliens.fandom.com/wiki/Pit-Ghor?oldid=161144"
Community content is available under CC-BY-SA unless otherwise noted.