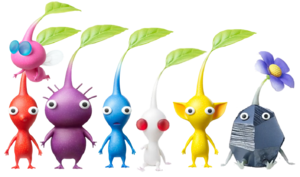 Pikmin are a semisapient species indigenous to Earth, or "PNF-404" as referred to by the Koppaites. Pikmin are given their names by the Hocotatian Captain Olimar, who claims they reminded him of his favorite food, which is known as "Pikpik Carrots". They serve as the mascot for the Pikmin franchise as a whole, and also appeared in Nintendoland's "Pikmin Adventure".

It is believed that Pikmin evolved over millions of years from the flowering plant known as Sutera cordata, which are evident during the third stage of Pikmin shown in their flowers.

While different species of Pikmin have their own characteristics, they do hold universal features to signify the species as a whole. All Pikmin types are vaguely humanoid in their anatomy. They have bulb-shaped heads, primitive arms and legs with three-digited hands and feet, and a single set of eyes. Pikmin species are separated by coloration and usually one physical feature to specify a type of Pikmin from one another.A notable feature all Pikmin possess as well is a singular stalk with a plant growing from the top. This special feature suggests that these organic lifeforms have structures similar to both animal and plant life. It is speculated in fact that this is actually a sapient plant lifeform, evolving from normal plant-like organisms. This is backed up with that most of their bodies can be found buried underground except for their leaf-like attachment, much like the roots of an actual plant. It is even described that their entire bodies except for the stems are ambulatory root systems.

Despite their plant-like nature, they do in fact possess a primitive skeleton structure. This is made up of a small spinal cord, with leg and arm bones attached to it, giving Pikmin a primitive nervous system. It doesn't appear to have a skull however.

As for organs, this is a notable mystery, but it is hypothesized that Pikmin "breathe" through their plant, as covering it in any foreign matter will suffocate the Pikmin in question. They've also shown a very slight bioluminescent nature in these plants, giving of a slight glow colored the same as the pikmin.

Pikmin have a very simple digestion system, if any at all. They are unable to chew food, and as such solid foods are out of the question, so the Pikmin resort to drinking nectar, or other forms of liquified matter formed inside Onions. It is possible they can gain "food" from sunlight given their plant anatomy.

Pikmin start their lives in the form of seeds, all of which appear the same except for coloration of the seed itself. Pikmin seeds have three known methods of coming to be, mainly either being released from a matured, dying Pikmin through its flower, or being released from an Onion or Candypop Bud. The onion and candypop bud are the more commonly observed methods of reproduction used by Pikmin, though how this is done is unknown.

All Pikmin have three notable stages in their growth, which is referred to as the Leaf Pikmin (1st stage), the Bud Pikmin (2nd stage), and the Flower Pikmin (3rd stage). Each of these stages are grown while the Pikmin is dormant undergrown, seemingly growing in a similar manor to an actual plant. It is unknown however how the leaf pikmin turn into a flower, as leaves themselves are just extensions of a flower.

What is notable though is that with each stage, the Pikmin in question become more aware of the world as they mature. This can be speculated to be the result of the flower itself, gaining energy from the sun and as such giving the Pikmin more energy.

Pikmins, by nature, are very sociable and curious and are capable of performing basic tasks. Different species of Pikmin (with the exception of Puffmin), had been shown to work together with both themselves and eachother, breaking species boundaries to help each other. This gives them a highly developed and friendly social structure. They're rarely ever found alone, and groups of over a hundred individuals had been observed working together, and socializing with one another.

Pikmin communicate in a form of whimpers, whistles, and hums that resemble singing. Groups of Pikmin had been seen "singing" in unison and making nice music together. They've been seen grooming eachother, and playing games with one another. This high level of socialism is vital for Pikmin, as they're are very notable prey animals to many creatures on their home planet.

Pikmin are a highly diverse group, with numerous species making up the genus. As of currently, there're ten total species of Pikmin that had been discovered since the first discovery of the planet by Captain Olimar, with numerous undiscovered species still left to be found, or left to speculation:

Retrieved from "https://aliens.fandom.com/wiki/Pikmin?oldid=187911"
Community content is available under CC-BY-SA unless otherwise noted.