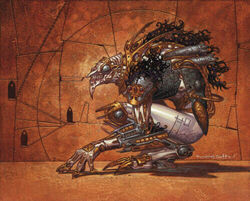 Carnivorous (though most do not need to eat at all)

A biomechanical language unreproduceable by normal vocal cords. Has an established script.

Magic: The Gathering Universe
Phyrexians are a form of biomechanical "life" that plays a central antagonistic role in Magic: The Gathering. Created by Yawgmoth as an answer to the terminal disease known as phthisis that once afflicted the Thran, they are driven to replace "flawed" flesh through artifice, resulting in a bizarre state of unlife. This process is known as "compleation".

The first stage of a Phyrexian lifecycle is the newt. Newts are descended from the Thran, but have been bred to be genderless, among other things. Newts are grown in vats, from which they emerge in a fully adult state. Once a newt emerges, it is usually put through the process of Compleation, wherein most of its normal body parts are removed and given mechanical replacements. Organic weapons like stingers and venom sacs are often implanted as well. Many Phyrexian soldiers are Compleated so thoroughly that they no longer resemble humans in the slightest. Generally speaking, the most heavily modified Phyrexians are also the most highly regarded, because destructive capability is valued above almost all else.

Phyrexians' most important values are efficiency and the search for perfection. One of the first lessons taught to newts is "waste not, want not".

Phyrexians can be divided into the following categories (take note, however, that these categories might overlap. Most Phyrexians are partly mechanical and partly undead at the same time, and all of them are certainly horrific.)

The original Phyrexia was defeated in the events of the Weatherlight Saga, Yawgmoth himself being killed, though the effects of their biological warfare lingered on in Dominaria. However, as a last resource, Yawgmoth created an oil known as the glistening oil, a form of assimilatory bioweapon that corrupts organic beings and makes them desire to achieve compleation.

Some of this oil was carried by the planeswalker Karn, due to him having a phyrexian personality matrix. The oil ended up on his artificial plane of Mirrodin, where it infected it's guardian, Memnarch, and began spreading as a fungus known as mycosynth. Memnarch later on would bring creatures from other worlds through his "soul traps", as means to enact his desire to become a planeswalker. But, in the mean-time, he contained the mycosynth.

After he died, this containment ended, and the creatures of Mirrodin became vulnerable to the oil. The infectees gathered at the planar core, and gradually rebuilt Phyrexia.

Years of planning later, the phyrexian forces emerged and took over Mirrodin, committing acts of genocide and mass mutilation against the natives, converting them into phyrexian lifeforms. A resistance nonetheless managed to survive, hiding in the Furnace Layer thanks to Urabrask's indifference. More recently, however, this might have been undermined as Elesh Norn took over Urabrask's and Sheoldred's domains, and the resistance has apparently been crushed.

Unlike the original Phyrexia, which had access to only Black mana, New Phyrexia has control over all five colours, twisting them into bizarre and monstrous new philosophies. However, this had the unintentional side effect of factionalising the previous monolithic force, and now the praetors fight for power amongst themselves. Elesh Norn, and by extension the Machine Orthodoxy, appear to be the dominant faction right now.

The phyrexian faction associated with White mana. They are highly dogmatic, following phyrexian scriptures to the letter, and ultimately desire to unite all beings. They are notable for being exceedingly literal: to them, "uniting all beings" is interpreted as sewing everything into one organism. They are very dermatophobic, and resort to ritualized flaying, replacing skin with porcelain plates. They are lead by Elesh Norn, the Praetor of Unity, who may now be the new Mother of Machines.

The phyrexian faction associated with Blue mana. They seek optimization and perfection through experimentation, and control laboratories more akin to slaughterhouses. They are lead by Jin-Gitaxias, the Praetor of Progress.

The phyrexian faction associated with Black mana, they are the most "traditional" of the phyrexians, being a semi-feudal society dominated by the armies of the thanes ("warlords"). They are the most ambitious and competitive of the phyrexians, constantly backstabbing each other for power, and possess no real observable function to the rest of Phyrexia. Currently, their praetor is Sheoldred, but due to conflicts with Norn she might be dead.

The phyrexian faction associated with Red mana, tending to the forges and supplying the rest of the system with metal. As Red mana embodies passion and freedom, this is the "least phyrexian" of all factions, and is constantly bothered by the dogmatic and freedom-crushing paradigm of Phyrexia as a whole. To these ends, their praetor, Urabrask, sealed off the forges to all other factions. He also allowed the Mirran Rebellion to survive, being confused by feelings of empathy.

Unfortunately, Elesh Norn has taken over Urabrask's domain and crushed the rebellion. He might be dead.

The phyrexian faction associated with Green mana. These phyrexians believe that the world should be subjected to a stage of rapid natural selection, and to these ends reject sapience altogether. Instead, they are governed entirely by predatory instincts, fetishing the role predators have in culling the weak and devoting themselves to creating ecosystems dominated by carnivorous "animals". They quickly took over the forests of Mirrodin, slaughtering the native humans and elves.

Their praetor is supposed to be Vorinclex, the Voice of Hunger, but in actuality they are lead by Glissa, a compleated Mirran elf. She is the one dictating the superiority of natural selection, and outright kills anything remotely intelligent in the phyrexian woodlands. Vorinclex is more content to wander around the vestiges of Tel-Jilad, the tree of knowledge.

Atraxa, Voice of the Praetors