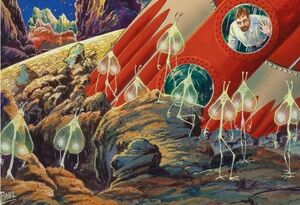 "Master of the Asteroid"

Clark Ashton Smith
Phoceans are a sapient race of short-lived insectoids native to the planetoid Phocea, located in the asteroid belt between the orbits of Mars and Jupiter. The atmosphere of their world is very thin, and the gravity is extremely weak.

Due to the weak gravitational pull of their homeworld, Phoceans are fragile creatures with a composition described as "porous and unsubstantial". They walk in an erect bipedal posture and their appearance is reminiscent of phasmid insects, a.k.a. "walking-sticks". They have thin pipe-like limbs, longer than those of Humans, and stand over 7 ft. (~ 2.1 meters) in height. Their heads are triangular in shape, flanked with "perforated membranes" and equipped with mandibles. Their eyes look similar to "faceted opals" and rest on top of curved eyestalks. Their bodies are covered in grey-green shards.

Their diet appears to be herbivorous, consisting of sponge-like fruits, vegetables and fungi. They're social creatures and have been observed in large numbers, moving swiftly by leaping. Their lifespan is short, and each generation dies out on the winter, to be replaced by a new one that is born on the next summer.

In 1980, the spaceship Selenite crashed on Phocea, leaving a single surviving crewmember, Edmond Beverly, stranded and trapped inside the vessel. The Phoceans gathered around the ship every day, leaving cryptic messages and offerings of food, as they seemingly worshiped either Beverly or the ship itself as some sort of deity. Even after they died out in the winter, this behavior continued with the next generations of Phoceans as well. Beverly never learned how to communicate with them.

Retrieved from "https://aliens.fandom.com/wiki/Phocean?oldid=199056"
Community content is available under CC-BY-SA unless otherwise noted.