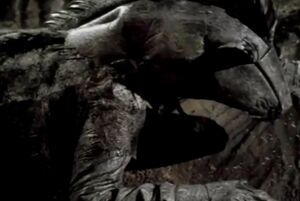 Terry Nation
Phibians are a primitive species native to the oceanic planet Aristo.

Like their name suggests, they're amphibious. They have five-fingered hands with claws and webs, a lizard-like head and tail, and make both hissing and grunt-like vocalizations.

Their sapience level is unclear, but they're known to attack those who venture into the planet's tunnels. Their world is 90% covered by water with a distinctively acidic composition.

Retrieved from "https://aliens.fandom.com/wiki/Phibian?oldid=181579"
Community content is available under CC-BY-SA unless otherwise noted.