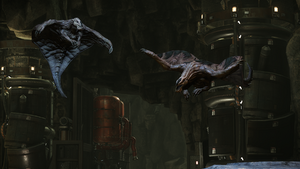 Phantoms are a type of carnivore found on Shear. An animal adapted for flight, a Phantom's body had a skin flab that extends almost completely around its body, excluding the head. Solitary, the Phantom is an ambush predator - lying and waiting until their prey wanders within reach. However, their adaptation for flight means that they aren't coordinated on the ground, movements restricted due to the skin membranes that make up the wings.

Retrieved from "https://aliens.fandom.com/wiki/Phantom_(Evolve)?oldid=171481"
Community content is available under CC-BY-SA unless otherwise noted.