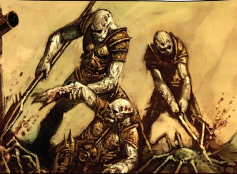 The Phaedon are a sapient species native to the planet Phaedon.

The Phaedon are a large tall species, noted by other races to be a hardy and enduring race to the point of being indestructible. They require no oxygen to survive, allowing themselves to work in a vacuum, but possess six red receptor eyes at the sides of their heads that may absorb some sort of radiation or light to allow them to function.

The Phaedons were a warrior culture, with its soldiers lacking names and only taught the art of killing.

Four hundred deccas or years ago, the Phaedons had emerged from a conflict called the Phaedon Wars that lasted at least seven hundred deccas. The world Phaedon had already been exhausted of resources, forcing many Phaedons to look for work out amongst the stars as cargo pilots to the Universal Trade Docks.

One Phaedon had received a strange assignment at the UTD. For some strange reason, an unknown shipment that had been switched at the very last minute and was given a brand new ship for his journey to his world. En-route to the homeworld, the Phaedon received an encrypted message warning him not to land on his world for whatever reason. Unable to determine the source or reason for the message, the cargo hauler continued on his journey, but not before contacting his superiors at the UTD, inquiring about the switch. To his surprise, no switch was ever made or even recorded what was in the cargo.

The cargo pilot brought the shipment to his world, where the dock workers, eager to know what was inside, unleashed an infestation of Deathspiders onto the planet. The Phaedon responsible for transporting the creatures was arrested on charges of terrorism and taken to Deep Six, where he was tortured for answers he could not provide.

The Phaedons were indigestible to the creatures, but the Deathspiders found sustenance on Phaedon's remaining resources, devouring everything in site. The Phaedons managed to wipe out the Deathspiders, but the survivors fell to infighting over the remaining resources. The Phaedons received no outside help from the other space-faring civilizations during the Phaedons Wars and also so during this crisis. Their world was marked with the designation of 'Bad Planet' warning all races to avoid. The last Phaedon was indefinitely interned on Deep Six and was designated as ersamus, untouchable, a being with no world or rights.

When word reached that Earth had fallen to a Deathspider infestation, the Phaedon, with the help of a Molien slave, escaped to seeks answers and vengeance for his people.

Retrieved from "https://aliens.fandom.com/wiki/Phaedon?oldid=182371"
Community content is available under CC-BY-SA unless otherwise noted.