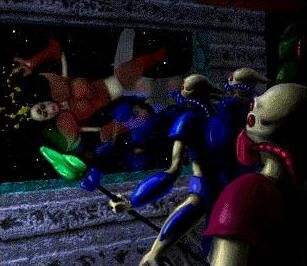 The Pfhor are an ancient race of spacefaring slavers. Bipedal creatures, they are somewhat taller than Humans, and have a set of three red eyes and a body covered in gray skin.

Little is known about Pfhor culture, although they appear to be run by a rather complex bureaucracy. According to the rampant A.I. Durandal, their religion is "pathetically boring", although the only information so far obtained about it is the presence of Sfiera, a goddess of both lightning and passion.

The Pfhor are divided into at the very least six ranks, or castes. These are listed below, in order of lowest to highest.

In 2794, a Human security officer aboard the starship UESC Marathon first encountered the Pfhor while orbiting a colony on the planet Tau Ceti IV. The Pfhor, being the slavers they were, attacked the Marathon and got on board, forcing the officer to defend the ship with all he had in him. Eventually it comes to light to the Human that one of the ships three A.I.s - Durandal - has gone rampant and is playing the Humans against the Pfhor for his own mysterious purposes.

Eventually, this war led to the S'pht, one of the races enslaved by the Pfhor, into rebellion. Seventeen years pass, and Durandal sends the very same officer to the ruins of Lh'owon the homeworld of the S'pht. While once described as a paradise, it is now a desert world upon the first S'pht Clan Wars and subsequent invasion by the Pfhor. He mentions that the Pfhor are intent on attacking Earth, and that this planet may stall their advance. This culminates in the activation of an ancient Jjaro A.I. known as Thoth. Activated, Thoth contacts the S'pht'Kr, a group of S'pht who avoided enslavement, who in turn destroy the Pfhor armada in the area.