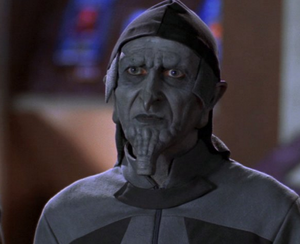 The Perseids are a humanoid species from Ugroth.

They are blue-skinned humanoids with long pronounced bony chins. Perseids are hermaphrodites, with each individual capable of either fertilizing another and gestating young. Two Perseids will typically form a temporary pair bond to create children and later, after the child's birth, the offspring is given to the state to raise.

The Perseids are a race of intellectuals priding themselves, but are mostly viewed as weak and timid by the other races.

The Perseids heavily influenced Humans, especially with the Egyptians, who mimicked the aliens with their elaborate chins using adornments. After Earth made its way into space and encountered the Commonwealth, the Perseids supported humanity's induction due to the ancient bond.

They were conquered by the Vedran Empire, and were partly responsible for transforming it into the Commonwealth after they launched a rebellion that convinced their Vedran masters that the reformation of their empire was necessary for peace.

Retrieved from "https://aliens.fandom.com/wiki/Perseid?oldid=168812"
Community content is available under CC-BY-SA unless otherwise noted.