Peridots are a subspecies of Gem with magnetism-based powers.

Peridots have light green skin, neon green eyes, yellowish green hair, and outfits in various shades of green. They often wear limb enhancers, due to the depletion of resources on Homeworld. The arm enhancers feature artificial metallic fingers which are not directly attached to their body, instead levitating around where the palms would be.

Peridots serve as technicians, Kindergarten managers, and maintenance workers. They are low-ranking compared to other Gems, and are only allowed into the more elite areas of Homeworld if a job is needed to be done there. 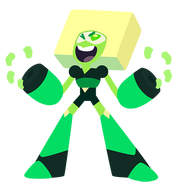 Squaridot
Add a photo to this gallery
Retrieved from "https://aliens.fandom.com/wiki/Peridot?oldid=160139"
Community content is available under CC-BY-SA unless otherwise noted.