The Perans were a warrior race that existed in the Marvel Universe.

The Perans were furred horned humanoids with four eyes that adapted to the harsh cold of Pera.

Peran civilization rose on the distant planet of Pera, that circled a star at the farthest reaches of the Outer Rim. The Perans were originally a simple people with their only concern in staying warm. Millenia ago a substance was unearthed and became known as Core. 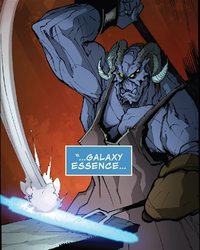 The Perans mastered the use of Core creating powerful weapons and warriors. A Peran female named Horn, used this substance to free her planet from slavery.

However the Core would corrupt the warriors, if left idle for too long, and so the Perans decided to take the weapons off world, committing themselves to traveling the galaxy and freeing the oppressed before moving on.

As they freed various worlds and races from tyranny, others joined their efforts and thus the Space Knights were born. Though their deeds made them heroes, it drew the ire of a monster named Lurgh, who united the Space Knights' enemies in an effort to hunt them to extinction.

Lurgh's forces pursued Horn's warriors back to Pera, destroying the planet wiping out the Space Knights, their name and exploits fading into myth.

A Kree named Mahia discovered a piece of Core, or maybe it was the other way around, but she used her newfound power to reform the Space Knights.

The Perans were a warrior race that fought for the ideals of freedom. They possessed Core empowered weapons and though it was the source of their power, they were responsible to understand its corruption and use. They garnered the respect of others who joined them in their noble quest.

Retrieved from "https://aliens.fandom.com/wiki/Peran?oldid=117778"
Community content is available under CC-BY-SA unless otherwise noted.