People of the Green Mist 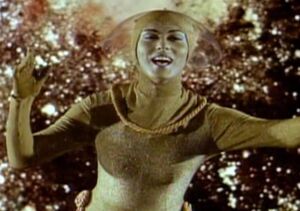 The People of the Green Mist are a race of sapient green-skinned humanoids which have the ability to survive unharmed in the vacuum of interstellar space and, strangely, feed on the atomic fuel known as deutronium. They come from a realm known as the Green Dimension.

Their means of communication are mysterious: on one hand they must be telepathic, since Dr. Smith was able to hear Athena's singing when she was outside the ship floating in space, and even when she was several hundreds of kilometers away; on the other hand, he still couldn't comprehend her language, and required the Robot to translate it (she would later learn to speak English, albeit with poor grammar). The Robot referred to the language as "a mathematical progression". Members of this race are also capable of teleportation, floating and hypnotism.

The males of the species are brutish savages and regularly engage in combat with each other. The females, on the other hand, seem to act much like interstellar sirens: seducing space travelers from the windows of their spaceships and hoping to get some precious deutronium.

Retrieved from "https://aliens.fandom.com/wiki/People_of_the_Green_Mist?oldid=184327"
Community content is available under CC-BY-SA unless otherwise noted.