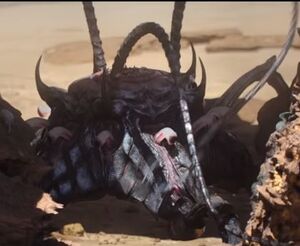 Slightly smaller than a cat

Alien Worlds
Pentapods are the dominant life forms on the planet Janus: a tidally-locked world in orbit of a red dwarf star. They're notable for exhibiting a specialized form of polyphenism that results in two radically distinct phenotypes, one suited for inhabiting the planet's dayside, and the other adapted to the nightside.

Pentapods are radially-symmetrical creatures, slightly smaller than a domestic cat. Like their name indicates, they walk on five insectoid legs. A circular toothed mouth is located on the top of their bodies and surrounded by ten eyes and three long thin appendages. These are used to capture food and drop it into the mouth. They're opportunistic omnivores, feeding on anything they can find in their environment.

Pentapods are hermaphrodites and mate in the twilight zone of their planet. Both partners impregnate each other during the act. After mating, they seek out windy plateaus, where they spawn swarms of airborne larvae that are dispersed by the winds. The larvae that end up on the desertic dayside of Janus develop as dayside Pentapods. Those who end up on the chilling nightside develop as nightside Pentapods. Despite their phenotypes being radically different, the two are exactly the same genetically and are not distinct species or subspecies, but rather the result of polyphenism.

Pentapods who develop on the dayside of the planet are skinnier, more agile creatures compared to their nightside brethren. Their shiny armor reflects sunlight, and their physiology is adapted to withstand scarcity of both food and water. Their antenna-like appendages terminate in venomous pincers.

Compared to dayside Pentapods, those who develop on the nightside are more robust and covered in shaggy fur that isolates them from the chilling temperatures of their habitat. They gather around sources of geothermal activity, where they feed on bioluminescent hopping grubs that live around the hot springs. After feeding on a few grubs, the Pentapods absorb their prey's bioluminescence and use it to attract more prey.

Retrieved from "https://aliens.fandom.com/wiki/Pentapod?oldid=199602"
Community content is available under CC-BY-SA unless otherwise noted.