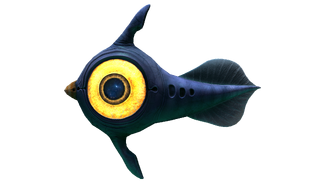 Subnautica universe
The Peeper is a small aquatic lifeform from the Planet 4546B. The Peeper is edible to human beings. The Peeper is seen as the icon of Subnautica. Peepers are often seen jumping out of the water to ascape predators.

The Peeper is a small fish, about the size of a human hand, that is comprised of a large eye, a beak and fins. It has two tubes on its head which are said to be used for digestive purposes. The Peeper eats coral deposits found in the shallows of 4546B, and are preyed upon by other animals on 4546B such as the Stalker and Sandshark.

Retrieved from "https://aliens.fandom.com/wiki/Peeper?oldid=172737"
Community content is available under CC-BY-SA unless otherwise noted.