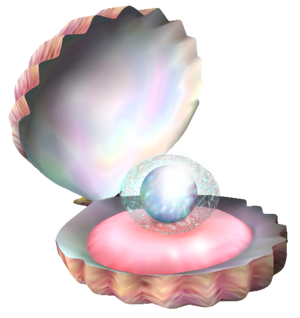 The Pearly Clamclamp is a species of molluscan-like lifeform that's found within the freshwaters of PNF-404. It was first discovered by Captain Olimar during his first expeditions onto the planet, but as far as later studies are shown, they haven't been found since.

The Pearly Clamclamp appears similar to the mollusks of Earth, particularly the bivalve family group thanks to the shape and structure of its shell. Both their interior and shell have a pinkish coloration. Many of these Pearly Clamclamps have a small pearl with a blue membrane exposed on the tongue. The pearl found on the Pearly Clamclamp may appear as valuable as other pearls found in mollusks, but those found in these specimens are actually more fragile, and as such less valuable than other molluscan pearls.

Evolving from similar mollusks found in the sea for a freshwater environment in the forest, Pearly Clamclamp convergently evolved a behavior similar to Venus Flytraps: their pearls acting like lures, and when a suitable prey items stepped onto the sensitive tongue it will clamp shut, and proceed to consume it.

Retrieved from "https://aliens.fandom.com/wiki/Pearly_Clamclamp?oldid=151595"
Community content is available under CC-BY-SA unless otherwise noted.